TOTAL AWARENESS: 2012 AND THE NEW EARTH.

The problem with mankind is not human but rather a result of the foreign installation, a dark energy/matter entity having possessed human’s energy bodies in a parasitic manner. Awareness is destroyed and replaced with a pseudo consciousness that we all accept as being our mind. This is an advanced form of RI, making the target an energetic zombie, then placing a servitor in the victim to control their thoughts and therefore their actions. In Westerners this condition is taken to it’s logical conclusion, the Anglo Demonic Reality: see www.psychotroniccrytals.com and www.supernaturalspirit.com.

In the early part of my development I had great trouble ridding myself of this unwanted parasite. When one rids one’s mind of it using meditation, concentrating on inner silence, or the agglutinising force that binds the energy body together, one finds the parasite is removed but returns once normal matrix-like consciousness is restored. Exorcising these dark energy/matter parasites permanently requires that one damages all of them simultaneously because the parasite is a hive mind. The parasite in you sits on the top of your energy body and is connected by an energy cable to the insectile who runs the herd of humans to which you are joined by this energetic cable. The insectile is part of a hive which supplies energy to their hosts the inorganic beings described by Castaneda in: “The Art of Dreaming…” Thus once you rid yourself of one of these insectiles, more come along because they breed like flies given a large food source – humans.

Dark energy/matter entities do not inhabit the awareness domain of light energy/matter beings, they do not have physical bodies, instead their dreaming body is binary: energy and non-corporeal dark matter. They have seven different types of awareness domains they can inhabit – seven different types of dream in which they simultaneously exist and are types of space – like time, to them time is just a distance which they can traverse like a corridor. This means that shredding these entities properly requires seven different PC’s tuned to each of the different types of dark matter/energy realities. That is why there are seven Psycrystals that use the shredded insectiles to power them and I have designed each one to use this energy to empower RV, Love, Luck, Money, Health… to shred insectiles or any other dark energy/matter entities one needs to simultaneously shred them in their seven different dimensions so they have no where to escape but into their space – like time to avoid destruction. One then needs to have seven bioparticles to shred the matter aspect of these entities. This drives the entity to try and escape via the space-like time, in it’s totality, so it can be completely, irrevocably destroyed.

Time travels from left to right in our mind’s eye so holding the large left hand awareness PC in your left hand, while placing the seven psycrystals at your feet in a circle around you, accesses this torsion field shredder (remember to place the bioparticles at the points of the seven psycrystals which should be pointing toward the centre of the circle (see photo on my website.) This past is blocked by the right hand awareness PC in your right hand which collects the insectile entity… and totally shreds it. Since you are connected to the insectile by your parasite it is drawn into your exorcism shredder PC assembly rather like a conveyor belt taking a victim into a shredder. The parasite is first expunged, then the insectile, then all it’s other parasites buried in it’s human herd, then it’s fellow hive insectiles and their parasite flock, then more insectiles…. leading back to the inorganic beings.

Since the crystal has a Capsule like energy body with nothing inside, if you can place your vulnerable awareness inside the crystal PC it is then totally protected from attack by insectile parasites. In effect you are transferring your awareness to the crystal world where you become a deva being, no longer human but a synergistic crystal awareness. Even after the physical body is destroyed your awareness has a new body both biophysical and bioparticle, energy and matter, created by your fusion with the crystal realm. The crystal gets awareness which since the earth is composed of crystals on it’s outer surface raises the consciousness of the planet exponentially making the earth in effect a giant deva. Since silicon and oxygen the constituents of quartz, are very common in the earth’s crust, humans partaking of this process have access to more quartz to house their growing awareness as they exorcise, shred, consume more insectiles…

The parasitic infestation of humanity is therefore used as fuel to empower the raising of your consciousness which makes the earth sentient via the quartz PCs and it’s bioparticle crystal PCs. Human awareness therefore turns the Matrix prison into the New Earth described in Revelations, flooding the inanimate world with consciousness. This turns the Matrix into the dream-like New Earth described as the 2012-1013 raising of consciousness.

The mechanics of this process until now have been kept secret, until the infestation of dark energy/matter was of such a density (Kali-Yuga) that enough psychotronic fuel would be available to empower the creation of Devic metahumans in the New Earth mileau. As one of the trail blazers for the new age, the progenitor of the new cycle, it is my job to give the mechanics of the process so it can be seen to be not only do-able, but advisable, if like myself one wishes to span world ages, not the seven score years of the infected human – unlike matrix humans.

Instead of placing the totality of one’s consciousness on the agglutinising force, done by visualising one’s assemblage point in the centre of both physical and biophysical bodies, one places one’s assemblage point in the centre of both bodies while simultaneously placing one’s assemblage point in the centre of the 4 Awareness PCs to merge your awareness with the devic world in the process protecting you from further attack. This enables the last vestige of your awareness to regrow inside the crystal world as a devic biophysical, bioparticle energy/matter 4 lobed nagual being, the perfected human. From that moment on your awareness is irrevocably used with the New Earth devic awareness of the metahuman, leaving the infected human Matrix behind as one gradually regains awareness of the true you. Having completed the exorcism protocol, one repeats it to access the psychotronic fuel to rebuild the damaged human awareness and to fuel it’s transformation into the nagual devic metahuman.

The BSRI-Engine is the other side of this process, it has nine PCs like the Seven PC plus two Awareness PC units, the BSRI-E is used to build the fabric of the New Earth., flesh out your dream as Psi has two parts, awareness and the reality awareness inhabits. Having raised and freed your consciousness and that of the earth, psychotronic fuel is used to change the fabric of reality creating the New Earth in all nine realms of the megaverse.

This is done by adding the BSRI-Engine PCs to your 7 psycrystals ini the circle around you (facing point inward in a circle around the 7 psycrystals, with their bioparticles at the points, all except the largest BSRI-E PC and bioparticle, the No1 human PCs) This should be placed at your left foot with the point and bioparticle facing your toes, this feeds the psychokinetic reality awareness into your body as you repeat the exorcism protocols.

The 7 PCs and the 9 BSRI-E PCs from the above are  needed to change the dream of reality; with the No1 BSRI PC one reaches the limit of the Matrix described by higher octonions. Combining the BSRI-E and the Seven PCs gives one the 16 double PCs, the two awareness PCs mimic the nagual, the double lobed energy body needed to empower the release from the Matrix called: ‘The Eagles Rule’ given in the “Eagles Gift” by Carlos Castaneda. This array when linked with the Exorcism protocol fed psychotronic fuel enables the Psi-Master who has freed his awareness to remotely view the dream of the New Earth that he intends. The BSRI-E then adds the energy to the Psi-Masters dream to psychokinetically overlay this dream upon the Matrix in the BSRI-E layout: 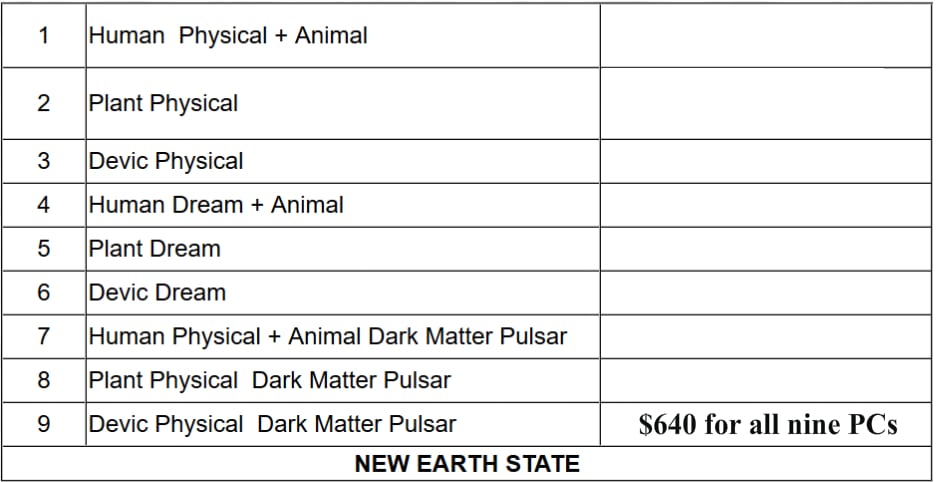 In the process as one goes through the nine different types of reality available to the metahuman, the insect, dark energy/matter realms of the Matrix are turned to fuel to empower the voyage of metahuman awareness into New Earth realities.

Touch BPC to it’s partner PC to wed it as described below.

The human totality consists of two energy bodies the biophysical dreaming body used for lucid dreaming, the more important one is the physical body which is an energy field which includes the morphogenic field used to control all DNA operations; this latter body is used for remote: viewing, sensing, and influencing of the physical world. Unless you are a dedicated Psychic Warrior Shaman, the physical energy body is of prime importance to you to control the Matrix.

To this end each psychotronic amplifier must consist of two components, the biophysical and bioparticle which mirrors the dual nature of the torsionic solutions that make up the energy fields. Each crystal is a capsule of empty space, the outer walls consisting of both biophysical and bioparticle energy. These crystalline energy capsules can be filled with any energy – if you know how (technology from the far future) In the case of the bioparticle PCs they use the energy parasitised from humans by their dark energy/matter entities, not to enable these parasites to reproduce, but to empower your physical physical body as the negative insectiles are shredded by the PCs. Since dark energy/matter entities have seven different types of space awareness, the morphogenic field derived from shredding them has seven different phases:

Strength: to make you physically stronger and mentally. This bioparticle is linked to the money biophysical. To input hold the strength bioparticle in your left sock, as it is only a small fringe of awareness that reaches up to the top of your toes that still exists in man. Putting the bioparticle PC in your left bedsock while sleeping automatically inputs the energy into your physical energy body while your biophysical dreaming body is active, linking the two physical and biophysical bodies creating the TENDON ENERGY described by Carlos Castaneda in: “Magical Passes” (Harper Collins 1998) “The old Sorcerers… gave the name of tendon energy to a current of energy that moves along the deep muscles from the neck down to the chest and arms, and the spine.

It cuts across the upper and lower abdomen from the edge of the rib cage to the groin, and from there it goes to the toes… This energy… which I call tendon energy… is a dire necessity in the lives of those who travel in infinity, or want to travel in it.” As the only scientist to research using RV psychic technology from the distant past (circa 10,000BC) I can confirm Castaneda’s work is seminal, correct and has devastating ramifications.

This tendon energy is the energy linking the physical and biophysical bodies when they have been wedded together by developing both, after eradication of the dark energy/matter parasite. To link the physical energy body to the biophysical there are seven gateways of dreaming, awareness, tendon energy described in Castaneda’s: “The Art of Dreaming”. By connecting the biophysical dreaming body with the physical energy body one can turn the lump of putrefying flesh into an energy body malleable, rechargeable and immune from ageing. Turning flesh into a dream, one in which you don’t age, have superhuman strength, endurance, senses and potency. The strength BPC allows the energy collected by the biophysical PC to be funnelled into your body while asleep to give you: